It’s the harsh reality that comes at the end of every season, a reality that isn’t fun and one that nobody likes. 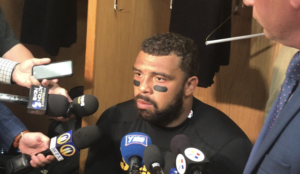 Changes will come. New faces will arrive, and familiar faces will be gone.

“This team won’t be the same next year,” said Cameron Heyward as he stood in his locker on Monday, looking around the room that won’t be the same. “Some guys are going to retire. Some guys might leave. That is just the business of the game. Every team changes. Every team goes through different things throughout the year. It just hurts to think this is the last time this particular group will be together.”

Heyward, like all of his teammates, hoped they had a little longer before saying goodbye for the offseason. The goal was the Super Bowl, not falling short in the Divisional Round.

“We have a good group of guys,” said Heyward. “Guys that work their tails off. This team is not going to be the same next year. Whoever is here has to be ready to answer the challenge.”

And that challenge, well it came from Heyward on Monday to his teammates. He challenged them to grow, to get better this offseason, and to work to eliminate mistakes and issues that hurt them this year.

“The things that happened this year, can’t happen next year. I know we only lost four games, but in those four games there was a trending habit of stopping the run. It’s just unacceptable. Our defense relies on a lot of trust. It relies on everybody being in their gaps. When guys aren’t sound we put our team at a disadvantage. It’s not heart. It’s not that guys don’t care. We put our heart and souls in this game. It’s tough. I can only speak for myself, but everybody hurts a lot because of this. We just didn’t get it done.”

Heyward said that the defensive scheme, and the game plan against the Jaguars in particular, was not the problem in the 45-42 loss on Sunday. Execution was.

“When you don’t execute and follow through on your assignments, it doesn’t matter what you play,” said Heyward. “You’re sacrificing the team’s success for your own. That is a critical thing we have to learn as a group. If one guy doesn’t do his job, or two don’t, you are hurting the other nine or 10 guys. We all have to get better from this. It was unacceptable. It falls a lot on me being the defensive leader, but we have to grow.

“You have to execute where the play allows you to. I know these guys can make the plays. We have to execute as a team, as a defense. We have to be a complete unit that understands it’s one agenda. I look forward to righting that wrong. We have whole offseason to think about it.” 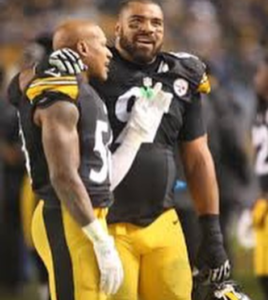 While football was mainly on his mind, there were two people that have been on his mind for a long time, and will continue to be, that Heyward talked about. Heyward had a close relationship with late Steelers Chairman Dan Rooney, who passed away in April, and is also close friends with Ryan Shazier, who suffered a spinal injury against the Bengals on Dec. 4. The two of them are special to Heyward, and as he spoke, you could hear the emotion in his voice.

“Those are things I think about,” said Heyward. “They were two central figures to our team, our community. We love them dearly. Ryan is still around. But those are two key cogs we constantly think about. I commend the guys for battling that and battling for them. If we keep them in our hearts, we continue to play for them.

“I care about DMR a lot. However long I am here, I am going to continue to play for him. I don’t need a patch to do that. I think every player in here is going to continue to play for a guy like that. It doesn’t stop here. It continues in our community work, in our offseason. For DMR, it’s not just doing it for a year. Trying to get that trophy to show that we care. It doesn’t stop here.” (Teresa Varley, Steelers.com)