Heyward is poised to become one of the best 3-4 defensive ends in the NFL and he should again provide an inside rush on passing downs.

Heyward is the unquestioned leader of this group (DE’s) and here is a recent snapshot showing why:

A running play during one practice went opposite Heyward but that didn’t stop him from running all of the way across the field to chase down the back who had already been touched down. And this was at the end of a camp in which the Steelers were in pads for every practice except for walk-throughs for an upcoming game. 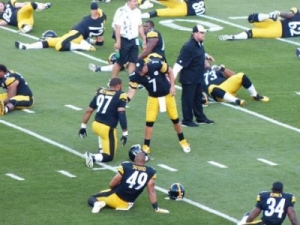 Dr. Ronald Cypher and his lens captured a great photo of Big Ben making his rounds to greet his teammates before the game against Buffalo.

Thank you Dr. Cypher! View more of his photos on Ben Roethlisberger’s website.