Congrats to the 2018 Steelers Team Captains! 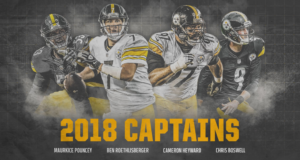 It’s defined in many ways, one being “a person who has commanding authority or influence.”

That definition fits for the Steelers 2018 team captains.

Steelers’ players voted on Monday for the captains, and Coach Mike Tomlin announced the results to the players before they came off the practice field.

Heyward, who is in his eighth season, is a defensive captain for the fourth consecutive year.

“It’s always an honor,” said Heyward. “To be voted by your teammates as a captain, I take a lot of pride in that. I get to represent my teammates. I just look forward to doing that, every day, on and off the field. Holding people accountable as well as myself.

“Whatever is needed by the group, I will do. It’s not just one thing. Whatever you need to do at the time, whether it’s being tougher on guys, if a guy needs to talk, and understanding a players’ point of view and relaying it to the coaches. And on Sundays representing the team the best that I can.”