The Steelers’ dreams of an undefeated regular season are history and they’ll have to wait at least until Sunday to clinch a return trip to the postseason following Washington’s 23-17 victory this evening at Heinz Field.

Washington kicker Dustin Hopkins’ 45-yard field goal with 2:04 left in regulation provided the margin of victory. Washington got into position to take its first lead on a 17-yard completion from quarterback Alex Smith to wide receiver Cam Sims on third-and-4 from the Pittsburgh 44-yard line.

Positives from the game: 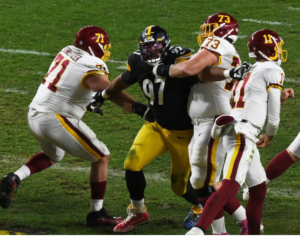 The Steelers tied an NFL record when Robert Spillane sacked Alex Smith, for a loss of nine yards, in the first quarter of Monday’s game against the Washington Football Team.

With that sack, the Steelers now have a streak of 69 games with at least one sack, tying the Tampa Bay Buccaneers who set the NFL record over a five-season span (1999-2003). If the Steelers record a sack next week against the Buffalo Bills, they will set a new NFL record at 70 consecutive games with a sack.

The Steelers streak began in Week 8 of the 2016 season against the Baltimore Ravens. James Harrison sacked Ravens’ quarterback Joe Flacco for the first of three sacks that day. Ryan Shazier and Anthony Chickillo also each added a sack.

The Steelers defensive scheme sets the players up to be able to put up big sack numbers, but Coach Mike Tomlin said it starts with the players.

“Quality players. It starts there,” said Tomlin. “Guys like Bud (Dupree) and T.J. (Watt) and Cam (Heyward) and (Stephon) Tuitt. They provide a wave that we ride. They are good individually. They are good collectively. They are consistent in terms of their performances.”

Tomlin understands that as he was on the Tampa staff during three seasons of the streak (2001-03) as the defensive backs coach, so he definitely knows what it takes to have a streak like that.

“I have been a part of several groups like that,” said Tomlin. “I was fortunate to be a part of that Tampa group that this group often gets compared to. The thing I think about when I think about the two groups are the quality individual rushers who rush well together collectively.

“We’ve got guys you can characterize as really good individual rushers, but they rush very well together. The understanding of the larger body and how they fit into it makes it happen for them and that is what provides consistency.”

The Steelers take on the Buffalo Bills for Sunday Night Football!

This is one loss and the Steelers are still in the drivers seat for the AFC North!