Voting for the 2016 Pro Bowl is underway! 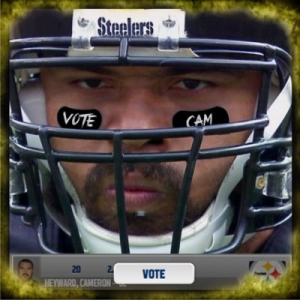 Have your say and send the Black and Gold to represent Steeler Nation in Hawaii on January 31, 2016.

You can sort players by team and position. Cam will be under Defense, then Defensive Ends.

Players will later be assigned to teams through the Pro Bowl Draft during the week leading up to the game, which will also air on NFL Network.

The 2016 Pro Bowl will be played on Sunday, January 31, 2016 and televised live on ESPN from Aloha Stadium in Honolulu, Hawaii. Game tickets go on sale to the general public on Monday, November 16. Fans can register on www.nfl.com/probowl for notifications regarding exclusive ticket presale opportunities.

The 2016 Pro Bowl will continue using the revised game format that debuted with the 2014 Pro Bowl, with NFL Legends captains having final say over Pro Bowl Draft decisions. The Pro Bowl will remain “unconferenced,” with several key playing rules changed. Players will be selected without regard to conference in voting by fans, coaches and players and later assigned to Pro Bowl teams via a fantasy football-style draft.

The 2016 Pro Bowl Draft Show will be televised on Wednesday, January 27 in primetime.

The fantasy football champion will have Hall of Fame help. Two Pro Football Hall of Fame wide receivers — Michael Irvin and Jerry Rice — will serve as NFL Legends captains for the 2016 Pro Bowl. Irvin and Rice return for the second time after being the winning captains during the previous two Pro Bowls.

The Pro Bowl players are determined by the consensus votes of fans, players and coaches. Each group’s vote counts one-third toward determining the 88 All-Star players who will be eligible for the Pro Bowl Draft.

NFL players and coaches will cast their votes on Friday, December 18. The NFL is the only sports league that combines voting by fans, coaches and players to determine its all-star teams. It was the first professional sports league to offer online all-star voting in 1995.

The players do their job on the field, so let’s do our job by VOTING! It is free and unlimited so please vote now…vote often.

Many of you know it is very difficult for Defensive Ends on our team to get noticed to receive votes, so they need our help.

We would like to give a BIG thanks to Matthew Solo for his amazing Pro Bowl graphic!