Grabbing the elusive win in Baltimore 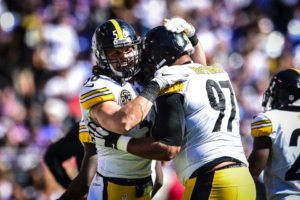 The defense was dominant and Le’Veon Bell ran wild in the Steelers win over the Ravens.

The Steelers took an early lead and never looked back, defeating the Baltimore Ravens, 26-9. The win improves the Steelers record to 3-1, and has them 2-0 in the early going in the AFC North.

“It’s great to enjoy this victory in a hostile environment, AFC North football,” said Coach Mike Tomlin. “I thought our guys responded in an appropriate way, not only to the environment and the opponent, but largely to the challenge all week. Just being able to stay focused, stay together, that is what professionals are called to do.”

The Steelers defense was dominant, with two interceptions, a forced fumble and recovery, and four sacks, including two by Cameron Heyward, and kept the Ravens from getting any continuity on offense. Ryan Shazier was on fire, with 11 tackles, including 10 solo stops, and had one of the interceptions and three pass defenses.
The Ravens opened the game with a 23-yard run by Alex Collins, but would only manage five more net yards rushing in the first half. The defense immediately stepped up after that first play, stopping the Ravens on their opening drive.

Turnovers are huge, they can change the game. – Cam, on the win. Listen HERE.

Grade card for the D Line:

It looked like it might be another long day against the run when the Ravens had a 22-yard gain on the first play and a 50-yard gain on the first run play of the second half. Otherwise, the Ravens had 10 yards on 13 other rushes. It was another monster game for Cam Heyward, who had two sacks and forced and recovered a fumble that led to the first TD. Stephon Tuitt returned after two-game absence and had a sack and big stop on third-and-2 that led to second TD. 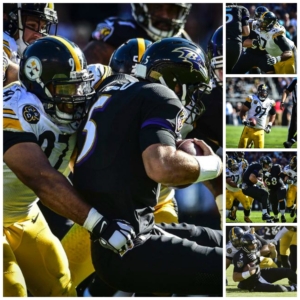 97 had another big game with four tackles, two sacks, a forced fumble, and a fumble recovery. He was considered for Steelers Player of the Week honors.

Read more on the win from Joe Rutter, Trib Live.

From the Steelers, Dom Rinelli:

Can we start a campaign to get Cam Heyward to the Pro Bowl this year?