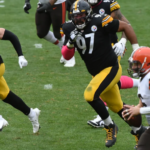 The Cleveland Browns thought this game would be different. That they were equipped to end the Pittsburgh Steelers domination at Heinz Field. That they were no longer going to be pushed around in this AFC North rivalry.

Instead, their trip back up the Pennsylvania Turnpike ended up being another lonely two-hour bus ride.

The roles remained the same in this series Sunday. The Steelers were the windshield and the Browns represented the bug. Minkah Fitzpatrick’s 33-yard interception return for a touchdown less than five minutes into the game set the tone as the Steelers raced to a 24-point halftime lead and eventual 38-7 victory.

“That was varsity ball today,” said coach Mike Tomlin, who improved his record against the Browns to 22-4-1. “They stepped up and stepped up big all across the board and met a challenge versus a team that was very good and very hot.”

Defensive line: Cam Heyward, Stephon Tuitt and Tyson Alualu did exactly what was needed. They shut down the run and forced the Browns into throwing situations. As Baker Mayfield’s interceptions demonstrated, that’s not usually a positive development for the Browns. The coup de grace came midway through the third quarter when the Browns went for it on fourth-and-1 from their own 29, and Kareem Hunt was dropped for a loss. The Steelers scored a few plays later to go up 31-7 and end the competitive phase of the game. Tuitt was credited with a half sack, but the inside push from him and Heyward created havoc for the Browns offensive line all game. Grade: A

Watch our dominant defense in action with some highlights from Steelers.com.

Listen to some post game reactions from Cam and teammates. 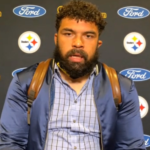 Also, I wanted to share a message from Cam in regards to an inaccurate quote attributed to him:

We all know Cam conducts himself on and off the field with integrity and class. Any of us who have followed Cam for any amount of time know he strives for excellence, but always plays with respect for his teammates and opponents. I will not lend any more time to the classless and inaccurate reporting but did want to share Cam’s message.

The Steelers face the Titans next Sunday.

Prayers go out to Devin Bush after his injury.