Defense rises up in 12-6 victory 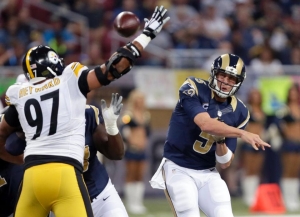 STORYLINE
This was how Coach Mike Tomlin assessed this matchup some 48 hours before kickoff: “On offense we have to make them stop us. We’ve stopped ourselves in some drives this year with penalties and so forth. We have to make sure we’re not beating ourselves. We have to make them stop us. And defensively we just have to continue to grow. It’s not about the opponent. We have to continue to develop the detail that will allow us to win in situational football, whether it’s red zone or third down or short yardage. You win in those areas with detail, and we’re continuing to grow in that area.”

HOW THE STORYLINE PLAYED OUT
Through the first half, the defense gave Tomlin exactly what he wanted. The Rams’ longest gain on offense was a 15-yard pass, and with only 21 yards rushing on nine attempts (2.3 average) the defense rendered the St. Louis offense largely one-dimensional. Also, the Rams converted just 1-of-4 on third down.

In the second half, everything changed for the offense following the left knee injury sustained by Roethlisberger some 10 minutes into the third quarter. After that, it became more a matter of survival, and the unit managed that. There were no turnovers and just enough movement of the ball to prevent the Rams from establishing control of the field position.

Things also changed for the Steelers on defense, because just holding their own wasn’t going to be enough since the lead was only six points at the time of the injury. The defense forced one field goal after the Rams gained a first-and-goal at the Pittsburgh 9-yard line, and then there was the interception by Will Allen that set up the field goal by Josh Scobee that iced the outcome.

Congratulations to Cam’s teammate and fellow Buckeye alumni, Will Allen on winning Steelers Digest Player of the Week honors.

Please keep Ben Roethlisberger in your thoughts and prayers. He was injured during the game and did not return. The team stated he would have an MRI on his knee this week.