The defense held strong again on Sunday, limiting the high scoring Cardinals offense to one touchdown. 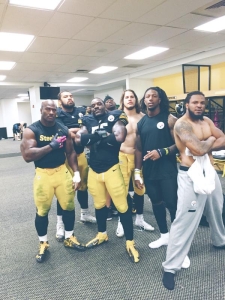 Check out a couple nice articles on the Steelers D:

What do you think that was breaking out all over the Heinz Field lawn Sunday in front of the horrified Arizona Cardinals?

“We are the Pittsburgh Steelers,” veteran linebacker Lawrence Timmons said in his prideful whisper. “Defense has always [shown] us the way.”

But here’s the really portentous “unless.”

Unless you’re the Steelers.

One lousy Arizona touchdown was all the combined genius of Bruce Arians and Carson Palmer and Larry Fitzgerald could scare up in a power-shifting 25-13 upset by the home team, and the Cardinals might not have managed that had it not been for a 31-yard Steelers punt that set ’em up at the Steelers 47 on their second possession of the game.

Palmer flipped an easy 3-yard scoring strike to Michael Floyd six plays later, but none of the next 10 Arizona possessions ended in anything more menacing than a field goal.

No Arizona touchdowns over the final 53:17.

Mitchell, cornerback Ross Cockrell, Gay, Antwon Blake and Golden comprised the secondary that shut down the baddest touchdown slinger in the league. With Timmons and Heyward and Moats and Stephon Tuitt, it looks like the kind of defense you’ve been screaming about is finally here.

It’s top of the line. It has allowed five touchdowns total in the past four games, one rushing touchdown all season, forced seven turnovers in the past three games, and forced perhaps the best offense in the league to stagger home having gone 2 for their final 8 on third down.

Now the really banging can begin.

And, from Rob Rossi, Pittsburgh Tribune:

The Standard could be super for defense:

The Standard may be the standard, but let’s get something straight. That isn’t the “S” word to associate with the defense these Steelers are playing.

On Sunday afternoon, the Steelers defense came to the rescue of an offense that again took too long to get going without franchise quarterback Ben Roethlisberger.

The NFL’s No. 1 scoring offense did everything but score a bunch at Heinz Field. In a rousing 25-13 victory over the Arizona Cardinals, the Steelers continued to prove that denying points — even while surrendering yards — is how to play defense.

Five of six opponents have amassed at least 350 yards against the Steelers. The Cardinals collected 469.

Those opponents have scored only 11 touchdowns.

Four came from the New England Patriots, who opened against Steelers’ starting defensive backs who had not practiced together during training camp.

Since that opening loss, the Steelers have surrendered more than 20 points once. And the Baltimore Ravens needed an extra quarter to get their 23.

“We’re getting back to making teams one-dimensional,” defensive end Cam Heyward said. “I keep hearing about all the passing yards we’re giving up. But we’re stopping the run and not allowing a lot of points.

“Maybe people could start looking at that?”