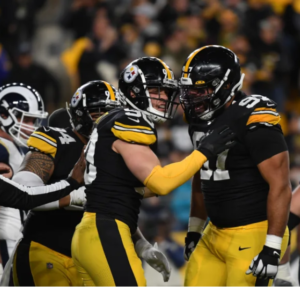 With former players from their Super Bowl XIV victory against the Los Angeles Rams in attendance, the Steelers went out and beat the same Rams with the same type of defense they used 40 years ago in a 17-12 victory on Sunday at Heinz Field.

It was the fourth victory in a row and fifth in the past six games for the Steelers, who improved to 5-4 — the first time this season they went over the .500 mark.

The defense held the high-powered Rams offense without a touchdown and had four takeaways, two by safety Minkah Fitzpatrick. The Rams only touchdown came on a fumble return by linebacker Dante Fowler after a high snap over Mason Rudolph’s head on the third play of the game.

Read more from Mr. Dulac and from Kevin Gorman.

Missed the game? We got you covered with game highlights from the Steelers!

Cam was disruptive again with three tackles, one of the four sacks, three hits on Goff, and two passes batted down at the line of scrimmage.

The team has a short week as they face the Cleveland Browns for Thursday Night Football.