Cam Heyward couldn’t get on the field. Now he’s charging toward All-Pro status. 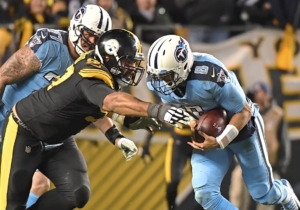 There was a time when Cameron Heyward couldn’t get on the field for the Steelers. He barely played in his first two NFL seasons as he waited his turn behind established veterans Brett Keisel and Ziggy Hood. Former defensive coordinator Dick LeBeau was criticized for his handling of the Steelers’ first-round pick in 2011. The oft-asked question: “How could a No. 1 pick need so much time to develop?”

Heyward doesn’t want to hear any of that. His reverence and love for LeBeau is as deep as anyone associated with the Steelers over the years. Still, one had to wonder what LeBeau was thinking on the Tennessee sidelines Thursday night when he watched his former pupil terrorize Titans offensive linemen.

Heyward put forth another dominating performance for the Steelers, with two more sacks to boost his team-high total to seven. He was in the backfield so much that Titans quarterback Marcus Mariota might have mistaken him for one of his running backs on occasion.

Heyward is quickly establishing himself as one of the most accomplished 3-4 defensive ends in Steelers history. His next sack will place him among the franchise’s top 10 all-time sackers. He has 32 career sacks, which is the third-most for any defensive lineman in team history. Only Keith Willis and Aaron Smith have more.

The sack did not become an official statistic until 1982, so legends such as Joe Greene and L.C. Greenwood aren’t on that list, but it shouldn’t detract from Heyward’s accomplishments, especially when you consider he’s done most of his damage in the past five seasons.

All but 2½ of his sacks have come since 2013, and he missed seven games last season with a pectoral injury. When he has been healthy, Heyward has been a dominant force. 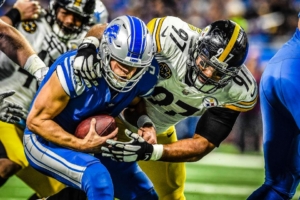 “It’s definitely gratifying,” Heyward said early Friday morning in the victorious Steelers locker room. “I appreciate every game, every play because it can be taken away from you that quickly. I’m just trying to make the most out of every play.”

Heyward and the middle of the Steelers defense have been catalysts in Butler’s defense, which has been tweaked since LeBeau left. LeBeau famously used the zone blitz help the Steelers become “Blitzburgh” in the 1990s. The 1994 Steelers still share the record for most sacks in a season with 55.

The 2017 Steelers are on pace for 54. They have 34 through 10 games after five more against the Titans

After Heyward’s seven sacks, inside linebacker Vince Williams is next with six. Ends or interior linemen Stephon Tuitt, Javon Hargrave and Tyson Alualu have two apiece. L.T. Walton has one.

That’s 20 of the team’s 34 sacks coming from defensive linemen or inside linebackers.

“Even if you’re not getting sacks you get the pressure, force some bad throws. We just have to continue to do it. I thought it was a collective effort. I know the outside guys didn’t get the sacks they wanted, but I thought they played a heck of a game because they kept that contain against a mobile quarterback, the most mobile quarterback in the league. You have to continue to do that. The sacks will come for our outside linebackers because they’re doing a heck of a job right now.”

One other notable difference for the Steelers is the number of times their sacks and pressures have come from four-man rushes. The Steelers still might be referred to as “Blitzburgh,” but they’re not dialing up exotic blitzes to pressure quarterbacks as much as they did previously. 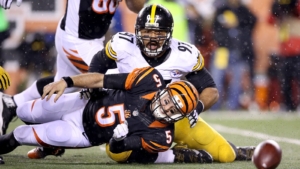 “This is the best four-man rush we’ve had since I’ve been here in the past six years,” veteran safety Robert Golden said. “They’re definitely making our job easier. We always say ‘Together we eat.’ Pass rush works with the secondary and the secondary working with the pass rush. It’s been working great, and hopefully we can keep it going.”

It worked to the tune of five sacks and four interceptions in the same game Thursday night, the first time the Steelers accomplished that feat in 35 years.

Heyward is at the forefront of the sack brigade. His next sack will be his eighth, which will set a career high. As he was conducting an interview after the game, several Steelers offensive linemen walked past on their way out and shouted “Heyward for Pro Bowl.”

That’s almost a certainty at this point. All-Pro recognition isn’t out of the question either.

“There is still a lot of football to play,” Heyward said. “I do think I’m having a great year, and I just want to keep doing it. The defense allows me to do it, and the guys are counting on me to do it.”