Cam has big game in front of role model 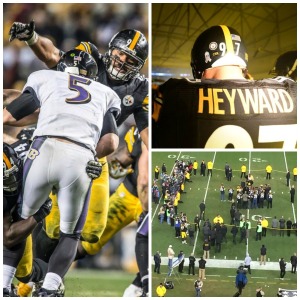 Cam had a monster game as he was in the face of Ravens QB Joe Flacco all night. He was credited with 2 tackles. but his QB pressures were what helped the defense get off the field each time.

After rushing for 157 yards in the first meeting, the Ravens were held to 63 yards rushing — the second game in a row the Steelers have held the opponent to 63 yards rushing. What’s more, the Ravens didn’t manage a run longer than 12 yards. DE Cam Heyward continues to put pressure on the quarterback. Rookie DE Stephon Tuitt had several QB pressures in the first half.

And, this was a special night because the Steelers retired the jersey of Mean Joe Greene. Cam and Brett Keisel were as close as they could be to witnessing the retirement.

It was seconds after Steelers President Art Rooney II said the words, “I am honored to declare that No. 75 is officially retired,” that Joe Greene took off his glasses and had to wipe away a few tears. Standing around the 20-yard line, surrounded by family, former teammates, and 63,971 screaming fans, and even current Steelers Cam Heyward and Brett Keisel and Coach Mike Tomlin, Joe Greene stood alone as the man who represents what the Pittsburgh Steelers are all about.

And, from Scott Brown, ESPN.com:

Steelers coach Mike Tomlin had Joe Greene address the team before the game, and defensive end Cameron Heyward was among those ready to jump out of his cleats after hearing from one of the NFL’s all-time greats. “That’s one of my heroes,” Heyward said. “I wouldn’t be here today if it wasn’t for him, just because of the way he played the game. That’s a role model you want to live up to.”