Big win for the Steelers 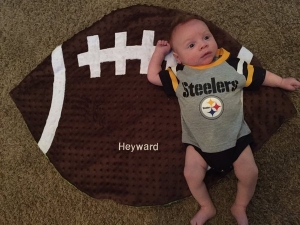 Cam had a great game with two tackles and a big sack, along with some tipped passes. He was once again considered for Player of the Week honors.

His third-down sack of McCarron at the goal line thwarted Cincinnati’s second-half momentum, but Heyward had levied consistent pressure on the quarterback for much of the game. On his sack, he walked back Andrew Whitworth, then spun for a one-handed quarterback grab.

The Steelers offense was its usual explosive self and the defense had three interceptions from three separate defenders (William Gay, Stephon Tuitt and Robert Golden).

1 thing I love about Cameron Heyward: when he gets a paw on a ball-carrier, he rarely gets away. – PensInsider

Congratulations to Cam and his teammates!

Now, click on 0ver to VOTE to send them to the Pro Bowl! Fan voting ends on December 15.