The Steelers defeated the Bengals by a score of 27-17 to get the win AND to earn the title of AFC North Division Champions! 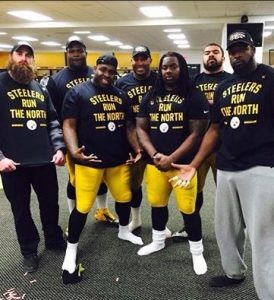 Through this journey we’ve been on, we just tried to constantly grow. We still haven’t seen the best. We left some plays on the table. — Cam, from his post game interview.

The Steelers won their first AFC North title since 2010 and captured the No. 3 seed in the AFC playoffs. Coach Mike Tomlin has to be as proud of his team’s mettle as he is that the Steelers won eight of their last 10 games after going 3-3 to open the season.

Unheralded cornerbacks Brice McCain and Antwon Blake came up huge for the Steelers. McCain intercepted Dalton twice in the first half. His second pick set up the Steelers’ second touchdown of the game. Blake, who has been playing nickelback with Ike Taylor out and McCain elevated to the starting lineup, made the play of the game when he ripped the ball away from Bengals wide receiver A.J. Green after a catch and then recovered the fumble.

Cam had seven tackles and a sack in the game. This gives 97 a team leading 7.5 sacks.

Congratulations to the Steelers on winning the AFC North!