Way to show up on Christmas Day to bring joy to Steelers Nation!

Cam added to his sack total with a double sack game! He also had four tackles, a forced fumble and was considered again for Player of the Week. 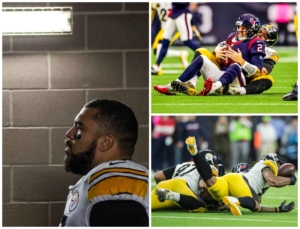 It’s not often that Coach Mike Tomlin dishes out words of praise on a player when asked directly about them during his weekly press conference. It’s even more infrequent that he does without even being asked about the player.

But when it comes to Cameron Heyward, Tomlin has nothing but words of praise for a player who should be in serious consideration for the NFL Defensive Player of the Year.

Heyward was a disruptive force against the Texans, finishing with two sacks and a forced fumble. It was play that typified what he has done all season, as he currently has a career-high 12 sacks for the year.

“I can’t say enough about the contributions of Cam Heyward,” said Tomlin. “Not only in the game, but really all year. Often times he gets misidentified because of our base structure. He is a 3-4 end, but the reality is he is an elite interior rush man, no different than Aaron Donald and Geno Atkins. When you look at it from that perspective, the season he is having is a really special one. He rushes on the interior, just like those men,  He rushes on the interior, He and is having a very comparable season to the very best in the world as far as being an interior rush man.”

The Steelers host the Browns for the final game of the regular season.