A win for the home crowd

The Steelers played their first regular season game this season at Heinz Field today against San Francisco. And, boy did they put on a performance for Steeler Nation!

The San Francisco 49ers didn’t appear flustered after the Steelers took an early 8-0 lead in the first quarter Sunday. Quarterback Colin Kaepernick marched the offense methodically downfield, setting up first-and-goal at the 10.

The Steelers were in a similar spot at New England in the season opener, and their collective knees buckled.

This time, the defense counter-punched

They delivered a flurry of jabs — two tackles for loss and a sack of Kaepernick. The 49ers had to settle for a 47-yard field goal after running 17 plays in eight minutes, 53 seconds. For the 49ers, it was the equivalent of a fly ball snared at the warning track.

“We met this week’s challenges,” coach Mike Tomlin said. “We gave up some big plays, particularly in the second half.”

But with the Steelers up 29-3 late in the third quarter, the defense floored the 49ers’ last-gasp effort with a goal-line stand. San Francisco’s 18-play possession stalled on fourth down from the 1 when fullback Bruce Miller lost his grip on the ball in the end zone.

The numbers weren’t pretty for the 49ers: 35 plays that netted three points. The numbers were reflective of a defense that bent but didn’t break until Kaepernick tossed a fourth-down, 14-yard scoring pass to wide receiver Anquan Boldin to narrow the gap to 29-10 with 13:16 remaining.

The defense, sparked by the inspired play of Shazier and safeties Will Allen and Mike Mitchell, made a string of momentum-shifting plays to set up the Ben Roethlisberger-led offense that shredded a 49ers defense, which had helped lead the way to a 20-3 victory over Minnesota last Monday.

San Francisco looked largely overmatched, especially in the trenches. The 49ers offense became predictable when Hyde staggered out of the game with a head injury early in the third quarter. The Steelers defensive front, anchored by defensive end Cam Heyward, clamped down on Hyde, who was held to 43 yards after rolling up 168 against the Vikings.

More impressively, defensive coordinator Keith Butler structured a game plan that kept Kaepernick under wraps. They dared Kaepernick (33 of 46 for 335 yards) to beat them with his arm, but the 49ers’ receivers failed him as they dropped several passes in the red zone.

The Steelers’ pressure was supported by pass coverage that held Boldin and Torrey Smith in check before Smith pulled in a 75-yard touchdown pass from Kaepernick early in the fourth quarter to partly silence a crowd of 66,472.

“I was frustrated at the end because we gave them a couple of things,” Mitchell said. “We have to be more disciplined and have more of a killer instinct. But I’m happy with the overall performance, especially in the run game.”

The defense, though, delivered one last blow when it turned back the 49ers on fourth-and-goal when rookie linebacker Bud Dupree tripped up Kaepernick inside the 1-yard line with 2:35 to go.

There was a lot of this from the Steelers D: 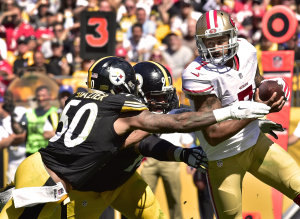 “We’ll take that off your hands”

And, then more of this: 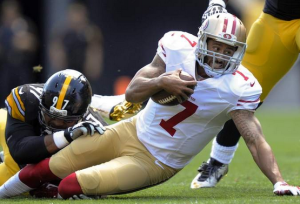 And, lots of this: 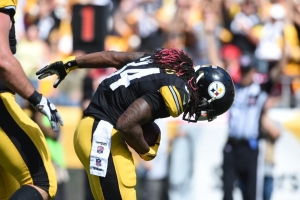 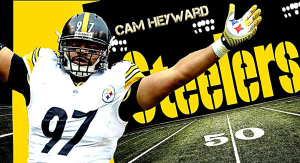 Cam Heyward is outstanding. So strong inside, athletic in space, and plays with leverage. Good to see!- Brandon Thorn

Way to get after it, Cam Heyward! – Steelers Nation Unite

The Steelers Cam Heyward showing off his strength sacking Kaepernick while being tackled . – Bill Phillips, WPXI

Cam Heyward blew up one play when he bulled through and tackled Hyde for a four-yard loss. Heyward then sacked Kaepernick for a seven-yard loss. – Ed Bouchette

Great team win today! We will most more photos and news soon!