A successful ending to the SB XL Alumni weekend

The Steelers held their SB XL Alumni Weekend the past few days, so the win over division rival Cleveland was even sweeter with the former teammates on hand. 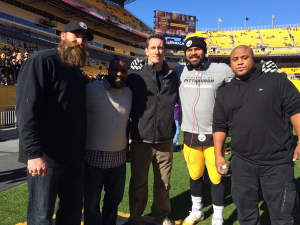 It was great to get the win on such a special weekend! 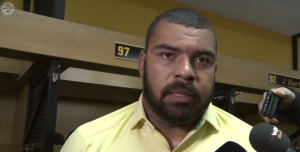 “Good thing is we got the ‘W’. I think one thing we wanted to establish this week is stop the run. We got the lead, kept the lead. And, giving up 15 yards, one of them was to a QB scramble..that’s pretty big. It’s one game, not going to say it’s here to stay. We need to continue to do that. Be consistent. – Cam, from his post game interview.

Since we’re talking defense, let’s give the Steelers run defense a hand for giving up just 15 rushing yards on the day.

Safety Will Allen led the Steelers defense with 9 solo tackles, plus 2 assists for a total of 11. Of those 11 tackles, one was for a loss, and one resulted in a forced fumble.

Cam had three tackles and a sack…and watch HERE as Heyward bull rushes into the backfield.

The Steelers have a bye next weekend…but we can still cheer the team on by voting them into the Pro Bowl. Voting is easy, free and unlimited! We need to keep on voting because so far NO Steelers are top vote getters.

Cam Heyward could easily be our teams defensive player of the year. He contributes huge every game.– @PGHThruTheLens