The Steelers and their fans were looking for a big win, a statement win. Last night’s huge win over the Colts in primetime was THE game we have been waiting for this season. 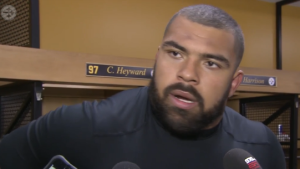 “I hope he buys dinner for that right tackle… He became the team sack leader on one quarter ” – Cam, on James Harrison’s performance.

Listen to part of Cam’s (and his teammates) post game interviews, including DeAngelo Williams talking about thanking the defense for helping him out.

And the Steelers’ quarterback maintained the offense will continue to expect even more after a 45-10 thrashing of Indianapolis.

“We left points out there and we left yards out there,” Roethlisberger insisted. “Whether I missed throws, whether guys missed catches, whatever it was. And all of us, we will take that upon ourselves. We want to be perfect. We want to catch every ball, I want to make every throw and when we don’t do it it’s frustrating.

The Steelers’ offense will get all the headlines, but it was their defense that had one of its best outings of the season.

A much-needed one considering the previous three performances.

The Steelers limited the Indianapolis Colts to 240 yards, forced three turnovers and held them to one scoring drive of more than 8 yards in a 45-10 victory Sunday night.

Until the Colts’ final, meaningless drive (one that netted just 30 yards), the Steelers allowed just one possession that lasted more than six plays and just three that gained more than 25 yards.

Indianapolis did not get a first down on five of their 12 (non-kneel down) possessions.

And, from Thomas Roper:

Cam Heyward took a man and threw him at Hasselbeck there.