It’s an honor to be recognized as an All Pro! Wow, what a difference a year makes. Seriously thank you to my teammates for making me better especially my D Line bros, my defensive brothers, my furious O Line brothers and the rest of my teammates as well. Special thanks to the family, friends, and fans! I love y’all. Now let’s go win this thing! – Cam 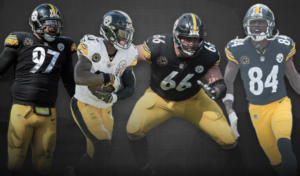 NFL insiders know that the Pro Bowl is a chance for a nice trip for a player and his family, but it’s the Associated Press All-Pro team that’s the most prestigious honor, with first-team All-Pro being a de facto designation as the best in the league at a particular position.

The AP All-Pro team is made up of 11 players on offense, 12 on defense (an extra defensive back), and five on special teams (punter, placekicker, punt returner, kickoff returner, and coverage guy.

The Steelers are well-represented on the AP All-Pro team with four first-team selections, including Antonio Brown who was the only unanimous selection.

This is the fourth consecutive year Brown was named first-team AP All-Pro. Brown finished the regular season with 101 receptions for 1,533 yards, a 15.2 yard per catch average, and nine touchdowns. He averaged 109.5 yards per game through the first 14 games of the season, missing the final two due to injury.

Bell, who was a first-team selection in 2014 and second-team in 2016, finished the season as the NFL’s third leader rusher with 1,291 yards on 321 carries and nine touchdowns. Bell added 85 receptions for 655 yards and two receiving touchdowns to his totals, finishing second in the NFL, and first in the AFC, in yards from scrimmage with 1,946 yards. He was selected as the flex for first-team (there is no fullback selected) and second-team running back.

“It’s huge. It means a lot,” said Bell. “That is the only kind of honor I look forward to each and every year. It says at your position you are the best in the world. I take that to heart. I can’t do it without the guys up front, Ben (Roethlisberger) throwing me the ball and giving me opportunities to make some plays. I am glad I made it and it’s a great honor.”

DeCastro, a first-team AP All-Pro selection in 2015 and second-team in 2016, is part of a stellar offensive line that has led the way for Bell all season, and he was voted to the Pro Bowl for the third time this year.

Heyward, who many felt was a Pro Bowl snub, finished the regular season with a career-high 12 sacks, adding 45 tackles, three pass defense, two forced fumbles and a fumble recovery. He was named AFC Defensive Player of the Week twice this season, for his performance against the Ravens in Week 4 and the Packers in Week 12 and is the Steelers’ Walter Payton Man of the Year.

Heyward got the news after practice on Friday from Coach Mike Tomlin.

“I was not expecting that,” said Heyward. “I am very humbled and grateful to get it. I can’t do it without the teammates I have. It’s an extreme honor, but it’s the guys around me that make me good.

“I just found out two minutes ago. I was a little bit shocked. Coach T was announcing them. I didn’t think I was going to get recognized, but it’s awesome.”